In the west of the Land of Dawn, there is a vast and boundless desert area called the Agelta Drylands. In the Moniyan language, Agelta means "yellow sand everywhere". The climate here is harsh and there are very few people, with strong winds all year round and other severe weather phenomena such as sandstorms occurring frequently. Only a few oases in the whole of Agelta have water sources, and serve as a stopping point for travelling tradesmen and adventurers. Although the climate is harsh and full of unknown dangers, it is rumored across the whole Land of Dawn that in the ancient desert labyrinths and ruins, there are treasures and the Twilight Orb left by the Ancient Ones. Therefore, adventurers from the mainland continue to explore the depths of the desert.

Except for the residences of a few aborigines, everything in Agelta is dangerous and unknown. Of course, in the eyes of adventurers, this implies unlimited possibilities.

It is the entrance to the Labyrinth.

Also called as Maze of Minos or The Labyrinth. The remains of the Minotaur Civilization at the end of the Era of Strife. After the destruction of the Minotaur civilization, the Minoan Labyrinth was cover with a veil of mystery. Some people say the Minos Labyrinth is the only way to enter the legendary Minotaur Castle. Others believes that Twilight Orb and Ancient Ones buried in here. There is a group of contractors who guard the entire maze.

Aldous is one of them. He survived the divine punishment, and still protects the Maze of Minos from any invaders who dares try to steal the Twilight Orb. This place is where

Minotaur started his-self training with the Twilight Orb's power after being defeated by his opponent as he fought in local brawl.

Esmeralda once came here to find secrets of the Starmoon Casket.

The Ruins of Tivacan are located at the westernmost point of Agelta. The city was once the most prosperous and powerful city-state in the western region. Its proximity to the ocean gave it a more favorable climate and rich products. But after its age of prosperity passed, this once-brilliant ancient city became the burial accompaniment of the tyrant

Khufra. All the residents inside disappeared, and the ancient city became a forbidden place that made people take notice when they heard about it. And in the deepest part of the ancient city called Tihuacan, a powerful and brutal tyrant –

Located hidden in the center of the desert, Stargate Valley has been the residence of astrologers for generations. In this place, the astrologers possess a unique abilities to foresee everything in the world. A young girl from Western Desert named

Esmeralda was selected to be a new successor of the astrologers among other candidates through hard assessments. This myterious and ancient sand castles also has had a special mission: to monitor

After several catastrophes, Agelta gradually became desolate and harsh, with water sources and settlements becoming the greatest needs of people traveling in the desert. In order to give people in the past a place to rest and replenish water, a treeman named

Belerick used his own power to create this small oasis to provide shelter for the passing trade caravans.

People said there were more and more rumors about the Twilight Orb here. This is where

The former Emerald Road is synonymous with prosperity. This main strategic point that enters and exits Agelta is full of cities and bazaars, and there are endless trade caravans that come and go. But after several catastrophes, the city-states around the Emerald Road were devastated. The once prosperous cities and developed trade exchanges no longer exist. Only the ruins of the broken cities tell of the glories of the past.

Khaleed from Artha Clan used to adventured along the Emerald Road.

A grassland in a part of Agelta, which once home to

Moskov and his Wildsand Clan before defeated by the malicious

Known as the City of Scholars, sits in the northern of Agelta region. It was once part of the old Moniyan Empire before the empire collapsed. Eruditio broke away from the imperial jurisdiction and embrace freedom and tolerance. Some scholars and artificers moved here because of the empire's over-reliance on magic and their will to become the inventors. This is where

Lolita works as the City Guard along with

Johnson. This place is also

X.Borg once worked here before his hometown was destroyed. A competition called "Survival: Nexus" held in here too through its creator,

Vale spend their childhood together.

The long Misty Mountains stretch across the north of Agelta, blocking the cold currents from the Northern Vale in the north, and supplying connected oases in the mountains, making both sides of the Misty Mountains and its hinterland the habitat of many races. This was once the birthplace of all orcs, but with the changes of time, the orcs and the Minotaurs left here one after another, leaving only

Hylos and other Centaurs living in the Misty Mountains in harmony with the nearby Eschackan tribes.

Los Pecados, or so-called City of Sins located on the edge of Agelta. After the collapsed of the city-state alliance in Agelta, this once prosperous strategically important commercial town became a land without owners nor rulers. A group of scattered soldiers occupied it and started a disorderly black market trade here. Crime activitists such as smuggling, looting, fighting has become synonymous with this place. Thief King,

Claude was born and trained his stealing skill in here.

A long region of sandy rain-forests. It is speculated that there are no humans living within these forests, but only wild animals and certain rare creatures such as Wild Imps, Goblins, and all kinds of nature nymphs.

Agelta is currently sparsely populated and the climate is harsh. But in fact, thousands of years ago, it was a fertile oasis that was destroyed in the Endless War. The oasis is now filled with yellow sand, and the originally clear rivers gradually disappeared and dried up, or went underground. The land that had lost its nourishment became dry and barren.

After the Endless War, Agelta ushered in its earliest inhabitants – the Minotaurs. This group of orcs traversed the long yellow sands and established their own city-state at the end of the desert where they thrived. Subsequently, the Eschackans among the humans gradually settled in the desolate western regions. This brave and combative race scattered throughout Agelta, giving birth to a number of city states and tribes.

At the beginning of the Golden Era, the armies of the old Moniyan Empire stepped into Agelta and conquered all the city-states and tribes of the Eschackan, incorporating the western region into the empire’s territory, and implementing colonial rule there. When the old empire began to collapse, the Eschackans left the empire as they wished.

With the collapse of the old empire, the material allocation and expropriation system under centralized rule no longer existed, and was replaced by an endless stream of commercial exchanges, and the Emerald Road in the western region also began to rise due to a large number of trade exchanges, bringing it prosperity.

The rise of the Emerald Road swelled the ambitions of tyrants. The Tivacan tyrant

Khufra from the westernmost part of Agelta, led his army to invade and foolishly attempt to conquer the whole of Agelta from where he would rule the entire Land of Dawn. His plan ultimately failed, and the once glorious ancient city of Tivacan was silenced with its tyrant leader and followed him to the grave.

In order to avoid the re-emergence of ambitious people like Khufra and the threat of the Abyss and the Moniyan Empire, the western city-states established a loose assembly composed of city lords, nobles, and great merchants to continue to maintain their rule. But with the sudden appearance of the Twilight Orb, a serious disaster once again struck Agelta. A violent destroyed most of the city-states and the civilization of the Minotaurs there, burying them in the yellow sand.

The unique thing in the culture of the Western Region is the Eschackan's view of death. Every Eschackan believes that after death, people enter a cycle of reincarnation. The death people will find a new host, while the old body will become the host of another soul. Under such conditions, the Eschackans turn the dead into mummies and place them in huge, delicate tombs, waiting for "reincarnation".

Many nobles and monarchs start building a tomb for themselves while they are still alive, and build it magnificently. Therefore, in the long yellow sand, there are large number of tombs that are full of treasure.

The special environment in the desert made the Eschackan people very good at raising various mounted animals, and the quality of the horses and camels they raised was much higher than those of other ethnic groups. All Eschackans cherish their animals and regard them as partners.

In addition to horses and camels, the Eschackans also breed a peculiar desert creature called dinozard. This huge and ferocious creature can travel in the desert for many days without a water source, and can glide in the sand. The strong survivability and huge body make the dinozard the most convenient means transportation in the desert, so that it is als known as the Desert Ark. But so far, only a few Eschackan people know how to tame this extremely ferocious beast. Once, a little fella named

Barats met a small dragon lizard as he was in his journey to found a treasure and soon they had built a strong bond and relationship. Even though for some reason, there is ruthless people hunting this creature down for their own beneficial and prizes. 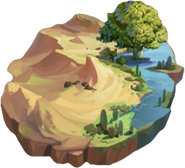 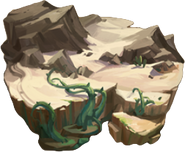