A guard of the Minos Labyrinth, who kept his pledge even after the kingdoms fall. He has blocked off intruders who covered the kingdoms heritage for a century with an unusually huge arm.

Legends from the Land of Dawn say that the Western Desert's Minoan Kingdom possesses a mysterious labyrinth. In the maze is a statue of giant minotaur, which the people consider to be the mecca of the Minoan Kingdom. Some say that there is a group of mercenaries who guard the entire maze. The Kingdom produced a lot of precious jade, which brought the Minoan people great wealth. Very quickly, the entire kingdom was lost in the intoxicating allure of gems. Even many mercenaries, tasked with guarding the sacred maze become corrupted, abandoning their duty. Only one stayed―Aldous, who had never forgotten his duty and guard the Minoan Labyrinth.

Until one day, a god came from the heavens to punish these lands. The powers of light and dark decimated the entire Minoan Kingdom, which even Aldous could not escape. The two streams dark and light energy surged into his body. Aldous thought he was about to die. However, the two streams of energy collided, causing great changes to his body. His skin grew long-black scales that could resist most attacks and monstrously large arms that could easily strike fear into people's hearts.

When Aldous awoke from his daze, he found his people's kingdom all gone and the mysterious maze was now sealed by some unknown force. The remaining minotaurs decided that Aldous would stay to defend the maze, while the others travel across the Land of Dawn to find answers. News of a mysterious force sealing the Minoan Maze spread quickly to the Abyssal Kingdom. To gather this strange energy, Selena decided to bring her Abyssal Demons with her to the entrance of the Minoan Maze―A huge battle was about to begin.

Main article: Scourge of the Gods 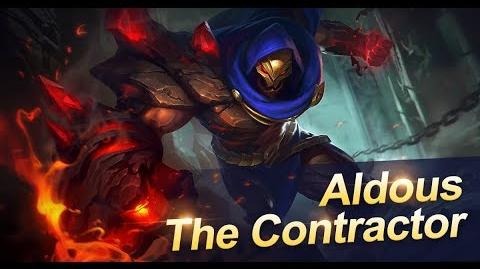