This article is about playable character units in Mobile Legends: Bang Bang. For other uses, see Heroes (disambiguation). 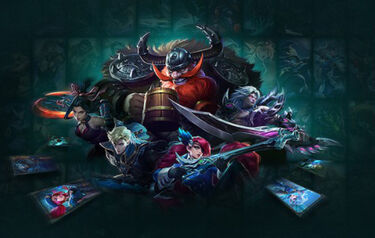 Heroes are the playable characters in Mobile Legends: Bang Bang. Each has a unique ability known as a skill. Because the outcome of the match is dependent on their intervention. During a match, two opposing teams choose five heroes out of 116 to gain experience and gold and level up their abilities in order to destroy the opponent's base. Most heroes have a distinct role that defines how they affect the battlefield, though many heroes can play multiple roles.

There are over 100 unique heroes, each with their own set of skills.

Julian is currently the latest among them all.

Heroes are divided into six categories based on their standard roles in the game and other relevant characteristics. The following roles are: tank, fighter, assassin, mage, marksman, and support.

Heroes can rise and fall, and eventually be forgotten, so they have the potential to be upgraded to new and improved gameplay and visual standards known as a revamp.

To use a hero in a match, you must obtain them by purchasing directly by using

Tickets. A hero can also be obtained in certain events.

Every week, a random selection of five heroes is made available for use in all matches with the exception of the Ranked game mode, but this does not mean you obtained them.

Trial cards can also be used to try a hero for free for a limited time. Once activated, the hero can now be used to participate in matches (except Ranked) until the free trial period ends.