He is the fourth and the last hero be introduced as a member of Forsaken Light.

Being a lone wolf, the smell of burning charcoal 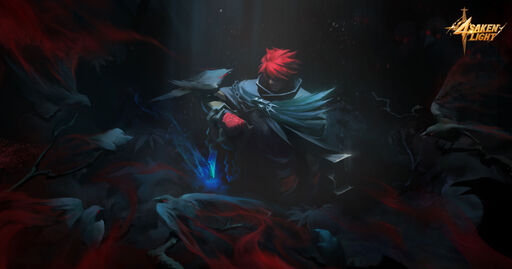 On a winter's night ten years ago, a snowstorm raged over the citadel of the Free Smiths' Guild.

The Free Smiths' Guild by Terizla was accused of pledging allegiance to the Abyss and wiped out by the Church of Light. The sole survivor was the leader's six-year-old son who wandered on the streets for days until the Church found the starving boy. The Archbishop saw the special talent in him, granted him the name of an ancient saint—Julian, and sent him to the special academy in the Church of Light—Raven's Nest.

Standing on top of a cliff, the school was home to orphans with special talents. The Archbishop told them that children abandoned by their families were not worthy of love, but he would give them love and rebirth, which must be repaid with gratitude and loyalty: they must become Ravens—a secret special force that answers directly to the Archbishop and cleanses the world of all heretics and evils for the Lord of Light.

Julian forced himself to forget his past, but no matter how hard he tried, he couldn't erase the nightmare from his mind: his mother left him behind and begged for mercy for herself, not even sparing a look at him...

Julian also remembered a strange gesture along with the nightmare: he'd always push the corners of his mouth up with his hands and force himself to smile subconsciously. But other than that, he couldn't remember anything else. He didn't know who taught him to do that or what happened back then.

The children at the Raven's Nest were called Nestlings. They would do strenuous chores and study tomes and battle skills during the day, and then stay in their separate caves for grace and rest at night.

The lives of Nestlings are lonely. But Julian made a family with the other guests in his cave: a rodent that loves bread crumbs, a chirping sparrow and a goat he took care of. On every windy night, they would listen to Julian talking about his loneliness and doubts. To him, they were his family who didn't speak.

With their company, Julian worked diligently at the Academy and was one of the most excellent students in labor, studying and fighting. He was praised by the Archbishop but did not notice another Nestling's jealousy towards him.

One night, Julian retired to his bedroom, only to find three stiff animal carcasses upon the stone bed.

Behind him came the other Nestling's evil snickers, "Rodents stand for unfaithfulness, sparrows ignorance, and goats weakness... Julian, you are not worthy of love or rebirth from the Church!"

His vision blurred in a sudden rush of blood, as he clenched his fists, his mind blank.

After a bloody fight, Julian was pulled away by members of the Church, and the Archbishop who happened to be there to review their work also arrived—there would be serious consequences. The severely-injured Nestling was lying on the ground, unconscious. Julian almost lost his balance against the wall, as if his heart had fallen into icy-cold water.

He closed his eyes, awaiting the Archbishop's punishment.

"Jealousy... Such a filthy, weak Nestling. Excommunicate this failure!"

"Julian, you did good. And you cleansed those things in that corner, didn't you?"

Julian was at a loss for words. He looked over at the carcasses in the corner: they were filthy, cold and insignificant. The other Nestling's words were still echoing in his ears—Julian, you are not worthy of love or rebirth from the Church!

"Didn't you!?" The Archbishop's voice was a pair of hands clenching around his neck, as Julian slightly quivered. After what felt like a century, he lifted the corners of his mouth and forced a stiff smile on his cheeks.

A sliver of the morning light shined from the east, half of Julian's face in the sunshine while the other half hidden in the dark. He nodded slightly.

The Archbishop petted Julian on the head, slowly chanting the scripture, "The fear and dread of you shall be upon every beast and fowl. Your verdict be accepted by every soul that walks the earth. And every path Light shines upon, by your hand shall they be drawn."

A bizarre light glowed in Julian's dark pupils. He raised his hand to summon his weapon, proving himself in front of the Archbishop.

Julian knew he would become the strongest Raven of them all. 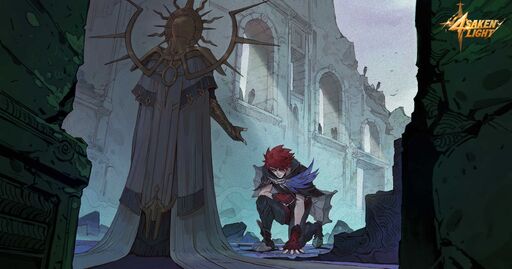 Years passed, and at the age of 15, these Nestlings faced their final tests before becoming Ravens: some infiltrated the enemy base, some scouted the Abyss, some eliminated heretics... After the perilous challenges, even the most elite Nestlings would be worn to a frazzle. But once they passed the tests, they would return to the Church of Light. The bright spire would be ahead of them, as their faces were lit with hope—just one step before rebirth!

But this was only the start of the hardest test.

At the turn in front of the Church, someone would call a Nestling by their birth name. If they couldn't help but turn around, they would be excommunicated and considered a heretic. This step was to test if a Nestling was loyal enough to forget all about the person they once were.

Julian passed the test. All these years, he had been living in fear of being abandoned by the Church and would even hear the Archbishop's words in dreams: A Raven must forget themselves! But... he was not a pure Raven. A voice at the back of his head had always been resisting the Archbishop's voice. He had no idea what the voice was and was confused about the two conflicting voices.

Late at night, Julian once again made that gesture: lifting the corners of his mouth up for a forced smile.

Why should he smile? Julian didn't know, but it didn't matter because he was the strongest Raven.

When Xavier blew open the city gate and fled with Yin and Melissa, the Archbishop sent Julian on his mission: poor Xavier's mind had been poisoned by heretics, and he should be given mercy. Julian chased them for seven days on mountains and finally caught up with Xavier and the other two who had exhausted their strength.

A battle was inevitable, and there was no clear winner between the strongest Raven and the greatest Arbiter of Light. But by accident, Julian's Raven hood dropped, and at the sight of his red hair, Xavier was stunned for a moment as though he had recognized something. Then, he took Julian's next strike.

Xavier could fight no more but was still protecting Yin and Melissa. He laughed, "It was you who came to cleanse me. Fine. After all, your mother..."

Julian's weapon didn't fall. His eyes were wide open, "You know about my past!?"

Xavier hesitated for a moment before speaking the truth: on that snowy night, young Julian was hidden in a corner by his mother. She held Julian's face and forced a smile, saying, "Stay here. Everything will be alright. When you don't know what to do... Smile ..."

Scared, Julian held onto his mother before she cruelly shoved him back and ran out to lure the enemies away... After Julian's mother was killed by the Ravens, Xavier keenly noticed Julian hiding behind some crates.

Julian didn't know what was happening or what reaction he should have. In that very moment, he remembered how his mother lifted up the corners of his mouth.

He forced himself to make a trembling smile.

The smile tugged hard at Xavier's heartstrings, and so he left with the Ravens.

"That is the truth."

The face of Julian's mother which he had forgotten about for ten years suddenly became clear, along with every wall in the Craftsmen's Union, the fires inside the furnaces, and the wooden toys his father gave him... Julian's hands shook violently. A Raven that found himself could no longer wield his sword without hesitation. His mother had loved him deeply and would even risk her life to prove it. He had never been abandoned by his family.

At that moment, Alice showed up at the entrance of the cave with demons. Xavier and the other two were gasping for breath after days of battle. It was at this desperate moment that Julian stood between them and Alice. He bought time for Xavier and the others to get across the rope bridge over the cliffs, before cutting off the bridge and facing Alice alone.

It wasn't protecting them in Julian's book. Eliminating heretics was one of the Ravens' missions, but it was not just a mission for Julian. He could only find Xavier and learn more about his past if he won this fight.

Despite the powerful demons in front of him, Julian still saw his mother's smile in his mind, and for the first time, his smile wasn't forced.

He finally found himself and also learned to smile. 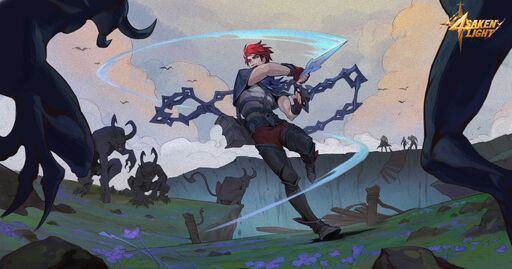 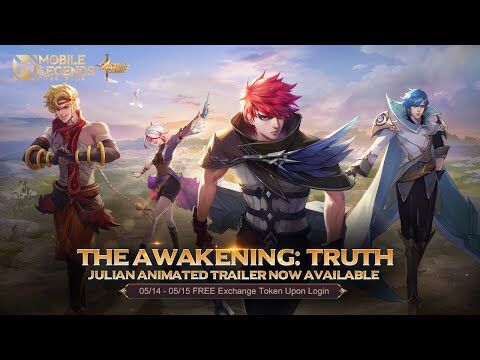