Jungle refers to any area of the map that is not a lane or part of either team's base, including the river that divides it. Junglers rely on killing neutral mobs in the jungle to keep up with their laning teammates in terms of gold and experience. In a standard 5-on-5 game of MLBB, 4 players on a team will be Laners, and 1 player will be a designated Jungler. Jungle Creeps are exclusively showcased in the Imperial Sanctuary Map. Jungle creeps are very strong in the early game and thus a jungler is needed to clear them efficiently. The team shares the jungle from the top and bottom areas. Some heroes are more suitable to Jungling than others, especially

Fighter, due to their ability to deal a large amount of damage in early game to clear jungle camps and/or to gank lanes quickly in the early game.

Purpose of the jungle is to gain buffs such as Purple Buff (Blue Buff), Orange Buff (Red Buff), Gold Buff, etc. The monsters are scattered throughout the jungle area in order for you to kill in return for gold, exp and various bonuses without interfering with your team's lane minions. At the beginning of the match, the monsters and the Cyclone Eye are spawned at different periods. A jungler with battle spell

Retribution and Jungling Boot is significantly faster at jungling than other heroes. There are several types of buffs given by killing specific jungle creeps. These include Purple Buff, Orange Buff, Gold Buff, and Walkie Grass. Killing the Turtle or the Lord will give a certain amount of gold and exp to the side that kills it. The Turtle also gives a shield to the hero and their allies that killed it which increases their Physical Attack and Magic Power. Magic Power is increased more than Physical Attack. When the Lord is killed, it will be summoned from the side that killed it. The Lord will charge down the lane with the least amount of turrets or turret HP and attack anything in its way, while enhancing the minion waves on all three lanes. After the 12 minutes mark, the Lord will turn into a Luminous Lord which gains the ability to use a charging skill on the first turret it encounters, dealing true damage and disabling the turret for a few seconds. 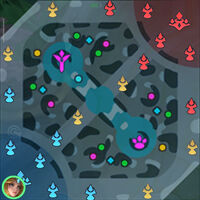 There are different types of monsters in Mobile Legends. Each of these monsters gives different amounts of gold, experience, and unique in-game buffs. It is vital for you to know the basics and advancements about these jungle monsters if you want to be a successful Jungler.

There are numerous small monsters or creeps, scattered throughout the jungle. These are really easy to kill and do not give out any buffs and are naturally, good for gold and experience only. These monsters spawn at various times and you can clear these camps often, to obtain more gold and experience.

This creep won't attack you and gives you the Walkie Grass which grants you extra movement speed and Stone Roamer will appeared moving in the river.

This creep has ranged attacks and arouses through increasing its own defense points when it has low HP.

This creep will turn into a little Crammer when killed and can survive up to quarter a minute.

| This creep has no special abilities aside from a Healing Buff.

This creep provides you a Gold Buff. Before the Crab spawns, a small Crab will spawn first, giving a lesser amount of gold and it will respawn more often.

These monsters spawn after 30 seconds of the game and 2 minutes after they are slain. These monsters grant the killer with exceptional in-game buffs, that are classified into orange and purple ones and have their own specialties.

They are duo creeps that give you a special buff called Purple Buff (aka Blue Buff), which grants Cooldown Reduction and reduces Mana/Energy Costs. It also grants you HP for each target you kill, the heal varying with the type of target.

This creep gives a special buff called Orange Buff (aka Red Buff), which deals extra true damage and slows enemies when you attack them.

The Legends creeps are comparatively, more difficult to kill. However, they grant the entire team with gold and EXP boosts, along with other useful effects.

The killer receives the Turtle Buff, which grants a shield that gives bonus Physical Attack and Magic Power, while their allies will get Gold Bonus and shield for once time.

The most powerful creep that launches multiple attacks to the enemies when provoked. When killed, it greatly enhances minions and associates with killers to push. At the 12 minutes mark, turns into the Luminous Lord which can charge at the first turret it encounters, dealing true damage and disabling it.

You will become invisible when you hide inside the bush.

Cyclone Eye provides you a blink effect that will glide forward in moving direction.

Jungling is a reference, to when you leave the lane, stay in the jungle to level up and help your teammates by doing occasional surprise attacks, during group fights. The basic idea here is that your team will be relying on you for game ganking. You should always be on the move, clearing jungle camps after camp and looking for opportunities to gank. Constantly check the minimap and try to camp at the lane nearest to the current objective to secure it more easily.

As your team's jungler, you need to use

Retribution as the battle spell.

Retribution allow you to buy the jungle boot which itself is the core item as a jungler. The jungle boot help you deal extra damage and get more EXP and Gold from jungle monster. Another reason to use retribution as a jungler that jungle monsters will take less damage when more than one hero standing near them. You can also use retribution spell on enemy to give them whether slow movement speed, burn effects, or reduce their Physical/Magic Damage.

As a ganker and jungler, it is imminent to never reveal your location. Going near to an opposition lane or using your skills on minions, will reveal your location to the enemy. So, it is always advised, that you should always stay in the shadows and work your business, only from there. Try to anticipate the enemy's movements and plan your attack strategy, accordingly. However, keep an eye on the enemy jungler and keep your team updated about his/her activities. Even when there are enemy heroes near your tower, the only thing preventing them from taking offense on your tower is the thought that there might be a hidden ganker, who might jump on them, at any moment. So, being stealthy and letting the enemy walk into the trap, is highly necessary and advantageous.

Another task as a jungler, for you, is to slay the monsters and get buffs for both your team and yourself. Slaying the Lord or Turtle can grant epic buffs for the entire team. Target for last hits on the monsters with

Retribution. It is important for you to have a thorough knowledge of the complete map so that you don't have to spend needless time, exploring and finding monster spawning places. Use the in-game pings to communicate with allies quickly to gank, group up for an objective or to retreat if you cannot help them at the moment.

One last thing you should keep in mind is that, as a jungler, you will level up and farm much faster in the jungle. So try to give the lane minions to your teammates, since it is their only source of earning gold and leveling up. 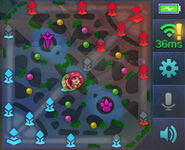 They were alternative in Celestial Palace or The Western Expanse map.

They were no longer available in the current map.