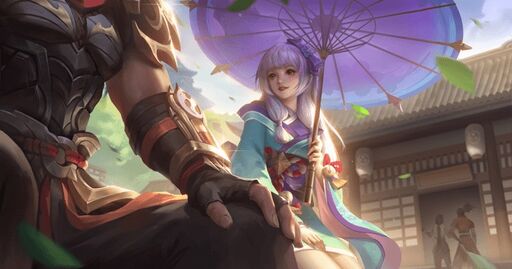 There was once an Onmyouji Master named Seimei, so powerful that he could control spirits and even bring the dead back to life. Many legends were told about him: some said he followed the Great Dragon to the Dragon Altar and learned the greatest yin yang arts, some said he once assisted the first Akakage in sealing the demonic Hanekage, and some even said he'd lived to this day with secret yin yang arts...

To Seimei's descendants, the most precious legacy from their great ancestor is the Seimei Umbrella that can transform into different shapes. The umbrella was refined by the great Seimei himself using power from a hundred ghosts. It is believed that it now possesses life and wisdom of its own, allowing it to choose its own rightful owner.

For years, the Seimei Umbrella lay quietly inside the shrine. Every year at the memorial for Seimei, people would sincerely pray to it on their knees, wishing for better mastery of the yin yang arts. But centuries passed, and the Seimei Umbrella never once showed any miracle.

Everything was changed when Kagura the descendant of Seimei, stepped into the shrine to pray for the first time.

Before the ceremony started, the naughty orphan girl secretly climbed up a tree outside the shrine to sneak a peek at the altar inside.

When half way up on the tree, she was spotted by a boy a little older than her. The boy named Hayabusa was the son of the Shadow Supreme Grandmaster from the Scarlet Shadow, here on an invitation with his family. He had no interest in the complicated ritual either and happened to see Kagura climbing up the tree when looking around out of boredom. Before Kagura could cheer for finally climbing up to the top, the grown-ups on the ground had spotted her and each began scolding her for possibly angering the great ancestor. But the little girl refused to admit her fault and argued that she only climbed the tree because she heard somebody calling out for her over at the altar.

As their arguments got heated, filled with indignation, Kagura slipped and fell head down first off the tree! Hayabusa immediately rushed to the tree trunk with his ninjutsu and leapt up to hold her by her waist. At the very moment, a large umbrella bloomed above Kagura and Hayabusa, and the two kids reached out to the handle at once, safely landing like a floating dandelion tuft.

"A miracle from the Seimei Umbrella!"

The crowd exclaimed in surprise, while Kagura stared at the big umbrella in her hand and smiled: "So, it was you who were calling for me..."

The Seimei Umbrella kept Kagura's company from then on. It witnessed every trouble she'd ever caused, experienced all her joy, sadness and anger as she gradually grew up, and understood her feelings for Hayabusa which changed from friendship to secret affection...

When Kagura dressed up to attend Hayabusa's coming-of-age ceremony, she accidentally heard their seniors talking and realized why Hayabusa became distant recently—"Is he going to leave the Cadia Riverlands, and also to leave me?"

Thunder roared and lightning flashed along the long road. But Kagura didn't care, because she could go on an adventure with Hayabusa, and with the Seimei Umbrella!

On the street of the Scarlet Shadow, Kagura stopped Hayabusa just after he left home and said: "Hayabusa, I'll go with you!"

As Hayabusa's name left her mouth, the young girl that needed the big brother's help was no more. Whether the oblivious Hayabusa had realized it or not, Kagura had become an all-new person to travel the world with him...

What a Beautiful Day!
Obtain via 2018 Starlight Member Exclusive Edition