Lancelot, Blade of Roses is a hero in Mobile Legends: Bang Bang.

As the eldest son of Duke Baroque, Lancelot was born rebellious. Dead set on resisting the political marriage arranged for him by his father, he traveled the country and led a licentious life instead. After being wounded at a drunken brawl in a tavern, Lancelot was rescued by Odette and finally came to realize what his heart truly yearned for. The prodigal son made a repentant return and thus began his adventure across the Land of Dawn. 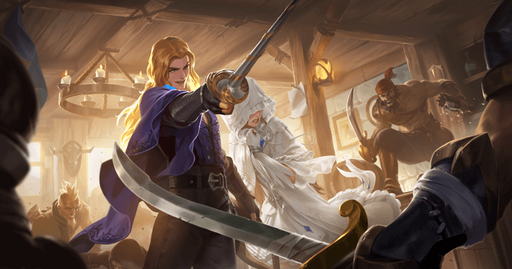 In the [southwest] of the Moniyan Empire [lays] Castle Gorge that had fallen into decline due to the depletion of its famed gold mines.

As the oldest noble in the Empire, House Baroque ruled over Castle Gorge. The eldest son of Duke Baroque—Lancelot was a handsome young man with [unmatched] sword skills. He'd received an all-round good education but also inherited his father's snobbery and haughtiness.

House Baroque had been in decline for years, and the duke was relying on loans to keep up a [façade]. To revive his family, the duke came up with a brilliant plan—to choose a daughter-in-law with a handsome dowry and make a fortune out of Lancelot's marriage. Or so he thought…

Lancelot had been fascinated by the charming knights and their heroic tales since childhood and believed that he was the most brilliant and charismatic knight of the modern time—so to him, it would besmirch his honor had he made money off his own marriage. So, Lancelot left home after a ridiculous duel with his father led to by a serious falling-out.

Even though he'd lost the financial support from his father, Lancelot made a living out of his excellent swordsmanship by attending contests across the country. He never lost a battle on the arena and would be uttering his family motto "Thorns remain should petals fall" while signing his initials onto his opponent's body with his sword.

Free of his father's control, Lancelot began fooling around with women, and stories of his romantic affairs spread throughout the empire. People jokingly called him the Blade of Roses. But Duke Baroque obviously didn't think of it as any delightful tale and was told to have crossed Lancelot's name from their family records in a fit of anger…

Lancelot played and traveled all the way to the Azure Lake, and after drinking his fill in a tavern, he held a harp, played and sang a song in praise of himself, secretly gloating over the cheer from the crowd. Then he suddenly noticed a few drunkards surrounding a young girl in a velvet mantle. Immediately he drew his sword to help the harassed maiden out of the situation but accidentally got hurt due to his inebriated mind.

After driving away the drunken hooligans, Lancelot stumbled out of the tavern knowing that his injury might be fatal, and he refused to collapse in a tavern so gracelessly.

Covered in blood, he dragged himself towards a tree and fell on the ground. Before he lost his consciousness, he saw a pair of glowing swan wings—maybe it was the angels coming to welcome his soul into heaven?

Lancelot woke up to find he was lying on a bed with bandages wrapped around his chest, an elegant young maiden smiling wearily at himself. The swan wings he saw before he fainted were actually the swan crown on the girl's head. Lancelot thought that he'd never seen a face so beautiful and innocent, but he could barely speak before falling into a sound sleep again…

The girl treated Lancelot with great care and kept using magic to help him heal. After a few days of struggle, finally his life was no longer at risk. It was then that Lancelot learned he'd been living inside the Swan Castle of House Alvin, and the girl that saved him was Princess Odette of the noble family.

It was forbidden to let any outsiders inside the Swan Castle, so Odette sneaked Lancelot in and hid him in a room atop the castle tower. As Lancelot gradually recovered from his injury, Odette would deliver food to him with a young maid every day.

At first, Lancelot thought with conceit that Odette saved him because she'd been enamored by his charisma. But later he found out that she was the girl he helped at the tavern.

In the first few days they spent together, Lancelot didn't change his old habit of telling half-truths about his swordsmanship and the great adventures he'd had across the land. He concealed his identity as a Baroque and called himself "Lancelot, the romantic knight of Castle Gorge" instead. Odette believed in every poem he sang while playing the harp—be it about his hometown Castle Gorge or the Celestial Palace he'd never been to, the bandits and thieves he'd defeated or the dark deities he'd only heard of on his trips. This young princess who'd been caged inside the Swan Castle since she was a child was full of curiosity towards the outside world.

Rather than being his usual conceited self, Lancelot started to feel guilty about lying. When he could no longer boast about his conquests before Odette, he realized he'd fallen madly in love with the pure princess. He regretted the promiscuous lifestyle he'd led before but found it difficult to reveal his feelings to Odette. So, whenever she came visiting, Lancelot would hold the harp and sing passionate love songs. First Odette didn't understand his intentions, and then became at a loss of how to respond. Later she just remained quiet with a blush on her cheeks…

In the few days before Lancelot fully recovered, Odette for some reason never showed up once. Not being able to see the object of his desire, Lancelot couldn't even stop his fingers from trembling while playing the harp…

The agitated Lancelot had to ask the maid that came to deliver food to him about what happened to Odette. The girl replied with a cheerful smile, "Someone proposed to our princess. She'd been busy with it…"

The words struck him like thunder. At that very moment, Lancelot broke a string of the harp out of utter shock.

After mulling over the situation, he requested the maid to send a letter to Odette:

Dear Princess, please forgive me for departing without a farewell.
I've decided to travel to every mythical land as in the songs I've sung.
I promise that the day I return to the Swan Castle, I will stand before you as a true knight.
Hopefully, with the Azure Lake and bright sunlight as my witness, I will finally be able to tell you what I've been muttering to myself…

Just as Odette put down the letter and rushed to look out of the window, Lancelot had quietly left for a great journey across the land.

As brutal wars were waged throughout the Land of Dawn, the Blade of Roses was about to compose a song of praise that truly belonged to him… 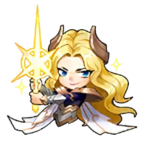 Golden Flash
Obtain via Legend of the Sword Event