Mobile Legends: Bang Bang Wiki
Register
Don't have an account?
Sign In
Advertisement
in: Citations needed, Pages that use a deprecated format of the math tags, Heroes,
and 9 more

As an adventurous child, Layla set off to explore the world after she received the Malefic Cannon from his father. Unexpectedly, Layla fell into the hands of Laboratory 1718. Her father give himself to the lab as a hostage in order to save Layla. To make up for her mistake and save her father, Layla picked up the Malefic Gun and set out on a rescue mission

In Eruditio, the world's forefront of science and technological advancement, one can find countless brilliant inventors. Layla was born into a family such inventors. But because of the time-consuming nature of their work, Layla's parents had no time to devote to their daughter. As a result, she was raised primarily by her elderly grandfather.

As the most outstanding scientists in Eruditio, Layla's parents had always hoped that she would continue to expand her knowledge of science and become inventors like them, leading the vanguard in making new and amazing scientific and technological breakthroughs. However, Layla had no interest in science. She didn't get along with her parents at all, especially not with her father, and developed a personality and interests quite different from theirs. Instead of setting her heart on the mysteries of science, she looked up to her grandfather, a former member of the Eruditio City Guard, and cultivated an adventurous spirit and irrepressible sense of justice under his stewardship.

Under her grandfather's guidance, young Layla would often practice various fighting techniques and find ways to hone her reasoning and investigation skills. As she grew older, her thirst for knowledge grew too, and soon her desire to explore the world beyond her homeland became so strong, she could no longer contain it. In Layla's mind, the technology of Eruditio should not only benefit the city and its people, but should be used to change the world.

However, Layla's father warned her that the world outside Eruditio was lawless and filled with danger, and that young Layla needed to mature a little more before even thinking of embarking any kind of adventure. But Layla's resentment and frustration toward her neglectful father resulted in this warning falling on deaf ears. She ignored him completely, convinced that this lack of support was his way of avoiding his responsibility as a father.

In fact, the truth of the matter was that Layla's father loved her more than anything in the world, and he used the most advanced Leviathan technology of Eruditio to build a Malefic Gun for her. However, fearing that Layla would refuse any gift he tried to give her, Layla's father gave the Malefic Gun to Layla's grandfather, who then handed it to Layla as a gift from him. But what Layla's father hadn't anticipated was that this gift would only cause Layla to yearn for adventure even more.

On her sixteenth birthday, Layla stealthily grabbed her Malefic Gun and slipped out of Eruditio under the cover of darkness to venture into a big, wide world.

She eventually reached a remote city-state in the southwest of the Moniyan Empire, where many children had mysteriously gone missing. Now, she finally had a chance to try out the fighting and tracking skills she had learned from her grandfather. After investigating the region and following the trail of clues, Layla found the gang of criminals who had been kidnapping the city's children, and followed them all the way to their headquarters, determined to put an end to their wicked deeds and rescue the poor children.

But what Layla didn't know, was that these were no ordinary kidnappers, but evil scientists from Laboratory 1718, who were kidnapping innocent young children for use in their horrible human experiments. Enraged at the thought of the kidnapped children's suffering, Layla picked up her Malefic Gun and broke into the holding area.

The difficulty and danger of the ensuing battle far exceeded anything Layla could ever have imagined. In the heat of battle, the Laboratory 1718 operatives recognized the Leviathan technology in Layla's hands, and thus they decided to change the purpose of their operation... Eventually, the kidnapped children were saved, but Layla fell into the hands of the evil scientists, who took away her Malefic Gun. Layla was imprisoned in a dark dungeon, and just when she had lost all hope, she was suddenly released and returned to Eruditio.

But when she returned to Eruditio, an even bigger shock awaited her: Her father had defected from the Scholars' Union and had become a member of the evil Laboratory 1718. All at once, a storm of reproach and responsibility fell upon her. Despite the fact that she never got along with her father, Layla couldn't believe that her calm and rational father would become a member of the fanatical Laboratory 1718.

Layla fell into a mire of confusion, and all she could do to maintain her sanity was focus on training and keep learning constantly in an attempt to forget the reality of the situation she had found herself in. As time went by, Layla grew in maturity, and her old grandfather came to the end of his life.

Before turning himself over, he made the rest of the family promise to never tell Layla the truth, so that she could grow up without having to bear the burden of guilt for his fate. Layla finally understood the motivation behind everything her father had every done and had said to her, and the true depth of his love.

She understood... and she became stronger. Under the light of the setting sun, Layla picked up the Leviathan rifle prototype her father had left behind and set off on her quest to find Laboratory 1718. 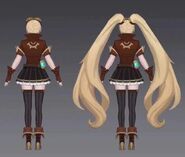 Comparing the design in 3D Before revamp and after revamp on Project NEXT: Phase 1

Carry Me to the End
Obtain via Emote Bundle.