After the death of her father, she was adopted by House Vance and became Harley's sister. Lesley regarded her younger brother as everything to her, and kept protecting Harley secretly.

Lesley grew up in the Vance household, where her father presided over the noble family's security. During an unexpected attack by a rival family, Lesley's father was killed. As the assailants approached the Vance household, Lesley took up her father's black long rifle and fulfilled her late father's mission. Tears rolled down Lesley's cheeks as she fired shot after shot, surprisingly, each one taking down an assassin. The final tear came as the final shot took down the last of the rival family's men.

Lesley was adopted by the Vance family, with the patriarch of the noble house even putting their sole heir, Harley under her tutelage. Harley, was a natural troublemaker, who used his talents in magic to unintentionally cause trouble for the Vance household. Only Lesley could keep Harley under control. Harley's troublemaking streak was the last part of warmth within Lesley's conscience.

After hearing about how Harley had travelled to the dangerous Land of Dawn after defeating the Boss of Dark Magic, Lesley followed him, along with her trusty heirloom rifle. After she found Harley through a long arduous journey, she discovered that the once immature young boy [has] changed through the numerous life experiences he had gone through. She decided it would be best to have her adopted little brother train, alone, while she would silently protect him from within the shadows. From that day on, all the monsters that were inflicted with Harley's magic would also be struck with a black bullet, that would impeccably pierce through their heart. The stories of the magical youngster who was followed by a mysterious black sniper, soon spread across the Land of Dawn, like wild fire.

So much for you
Obtain via Emote Bundle. 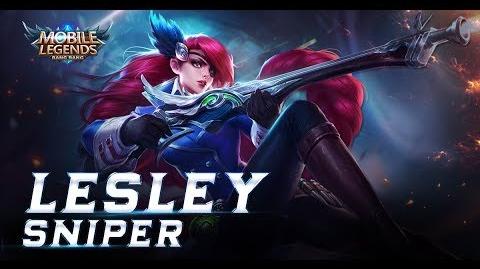