Lunox was born with magical powers, and her dreamworld reflects and changes the real world. With this power, she uses her dreamworld to temporarily maintain the balance of energy between order and chaos. But as the power of order and the power of chaos rushed into her dreams, Lunox fell into a long sleep and turned into one of the "Twilight Orbs."

As the final battle started, the Twillight Orb devoured the energies within the Mage and opened, from which stepped out a girl, who was surrounded by the power of Chaos and Order. Her eyes are deep as the ancient lake.

The mysterious atmosphere she created then put all of the heroes into dreamland… The power of Chaos and Order have been struggling against each other since the ancient time, and the struggle had driven the world into desperation. Lunox, the mysterious maiden, is the one who survived the desperation. With her unique talent, she can project her dream into reality and change it.

One day, a sound whispered to her and told her to balance the two powers with her dreamland ability. But the cost would be hunger than ever. For the world she loves, she accepted this fate, channeled the two powers into dreamland and became one of the Twilight Orb, at the cost of falling into an endless sleep. But the sound also told Lunox that one day, she will wake up to proceed with her fate: to find other Twilight Orbs that are forgotten by history 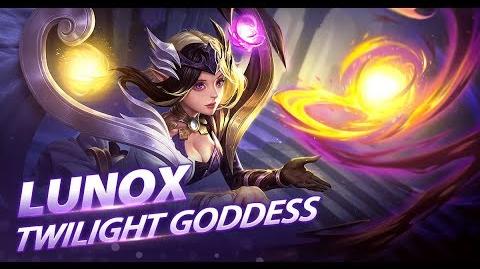