Previously, known as Mossenia, this is the place where most of the heroes live. This place is the main setting of

Silvanna and her family and also the place her brother, Prince Dyrroth's original birthplace until he was kidnapped by the forces of the Abyss.

Alucard's father and the second division soldiers and ordered that no descendant of a rebel could ever join the Imperial Army so that they would never seek the truth, just like Alucard did.

Capital of the Moniyan Empire. This is the most prosperous place in the Land of Dawn, and also the political and the trade center of the whole continent. Businesspeople, poetsand travelers of all races gather here. The magnificent and wide Oracle Plaza can accommodate the tens of thousands of people who gather to witness and celebrate the triumphs of heroes.

Built by the Moniyans who believed in the Lord of Light. At the beginning of the establishment of the Church of Light, the old believers and pastors used the Monastery of Light as the venue to perform various ancient and mysterious religious ceremonies. Later, the Holy Order moved from the monastery and came to Lumina City. Some people who upheld ancient doctrines returned to the Monastery of Light and followed the most stringent ancient doctrines. This is where

Xavier was given the title ‘Arbiter of Light’.

The region which surrounds the Moniyan Empire. This path is usually used by travelers, who intend to cross to other regions.

An isolated town, which had been abandoned by the people there, due to a famine. It is now used as a hideout for getaway burglars and criminals.

The part of the Moniyan Empire where

Cecilion, the only traitorous Blood Demon left, lived after escaping from the Abyss. This place is also the main setting of

Aamon. The other Paxley's are

Carmilla lived in House Ansaac as the Princess of Castle Aberleen with her father, King Earl Ansaac until she killed herself and was revived by her lover.

Lancelot and his little sister,

Also known as the Magical city, this is where the Vance Family,

Harley live. Castle Grandrock is located in the northern port of the Empire, connecting the Moniyan Empire with the trade and economic exhanges of the Northern Vale in the north. The so-called Castle Grandrock is a city built on a big rock. The huge rock section and solid walls make it super defensive. It is currently under the jurisdiction of House Vance, which is named the Duchy of the North.

Located at the Magical City, this is where

Harley studied and became a genius mage. The Lion Academy of Magic, despite not having a reputation, equal to the Ursula Magic Academy, is said to be more proficient in illusionary and trickery based magic.

As one of the purest and most beautiful Castle to have ever been built, it is home of the Alvin family. This is where

Odette lives and where

Lancelot recovered from his battle wounds.

Also known as Swan Lake. Located in the southern part of the Moniyan Empire, this is where the breathtaking Swan Castle stands near. Its beautiful scenery and pleasant climate make it an ideal place to live and cultivate. Once ruled by the Elves, the noble House Alvin now lives here in seclusion. They never participate in political activities within the Empire. As the collateral blood relatives of the Moniyan Empire royal family, they secretly guard the secrets of the royal bloodlines.

Thamuz was secretly lurking behind to seek the truth about the Twilight Orb, where he met

Tigreal during the Determination Event.

It is located in the east of Megalith Wasteland. A dense and primitive ancient forest, no one knows what lies inside it. Because it has been occupied by werewolves, no one dares to venture into this forest. Occasionally, the howling of one or two wolves resounds throughout the heavens.

Roger lived outside the Black Forest, away from humans and in a cave.

Ruby lived in a village near this area with her family until wolves attacked them.

A mysterious high-tech empire, where the strange race of Yasson like

Karrie lives. With human looks but deformed feet, they are agile and born to fight.

Team Lobby Background when the Project NEXT is released 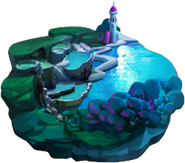