Northern Vale is a continent of ice and snow, space-time rifts and monsters also spawn within Northern Vale borders but one of the four Guardians of the Land of Dawn, undertakes all those responsibilities of protecting the world, protecting its border and ensuring its safety from the space-time rifts and monsters. It was previously called Nost Gal.

Northern Vale is nothing but a remote and strange name. This place is the coldest spot in the Land of Dawn and also, the northernmost end in human knowledge. Surrounded by the vast Frozen Sea, this place has been full of danger. Therefore, besides the sea lane, Megalith Wasteland has been the only way for people in Northern Vale to get to the other areas in the Land of Dawn.

Except for a few places, the whole of Northern Vale is covered by thick snow. With piercing wind rampant, the harsh weather and its unique disadvantageous location have made this place a fertile land. Life here has been extremely hard and only the most robust Northern Valers, could prosper here from generation to generation.

The harsh weather has forged these tough people. They have regarded courage and honor as the most precious things in this world. In the continuous struggle against nature, people in Northern Vale has created a unique world view and civilization.

Located at the borders between the Northern Vale and the Moniyan Empire, the Megalith Wasteland is famous for its giant and peculiar rocks. As the boundary separating the Northern Vale ice-land and the Moniyan plain, the configuration here becomes barren. Mysterious creatures inhabit in this crimson land. Amidst the vast wasteland, the giant rocks stand. These rocks formed a huge magic circle to block the Iceland Golems to invade the south. With the disappearance of the Iceland Golems, this magic circle was abandoned, leaving mysterious relics behind. This is where

Hilda and her clan, Garland lived, but they soon set out to the Land of Dawn to find a new habitation for the clan.

Situated in the northwest of Northern Vale, this snow mountain stands on the isolated island, like a tower pointing directly towards the sky. It is extremely cold around the Queen of Scourge or known as Queen's Peak and the whole mountain is covered by snow and ice all year round. Standing on the top of the mountain, the splendid aurora can be seen. However, ordinary people can never set foot on the such place. Queen of the North,

Freya lives their life with their tasks to escort the souls of brave heroes who died in battle into Valhalla.

After Einwald separated the two energies inside

Gord's body, he was filled with despair as he cannot use purest arcane magic after his body changed, but Einwald encouraged Gord to still continue magic studies and offered him a position in the Magic Academy. Gord accepted in hopes of finding a talented student to continue his unfinished research.

Valir was once an apprentice of Gord and studied here for some time.

Eudora worked here as a professor of magic.

Guinevere was once a top student of this Academy.

Lylia was known to be the naughtiest and most gifted student of all time. She is the reason why the Void Monsters startled and troubled the residents inside the Academy. It's because she was also misunderstood by others since she was a Black Wizard. The Magic Academy also seems to be in conflict with Eruditio about which faction is dominant.

Bane roamed the seas on his ship, the Black Pearl, and the ever-victorious sea dwellers called him Lord of the Seven Seas.

A place where the currents and high pressure were strong enough to tear up the sophisticated material Eruditio had created. There were many untrustworthy and indescribable creatures here including

The harsh environment has forged Northern Valer's adoration for martialism. They believe that dying on the battlefield is a supreme honor. Since childhood, every Northern Valer has been participating in all kinds of competitions, such as wrestling, weightlifting, and archery. All the competitions are for the same aim: to be the strongest warriors.

Once there is a conflict, Northern Valers like to solve through 1v1 duals. This kind of dual would be held based on complete fairness. Those in conflicts should defeat the component with courage and strength. The most venerable elders will be the witnesses. All the people, no matter whether they win or lose in the end, would honorably respect the results.

Northern Valers love feasts and drink. They would always get drunk during feasts. Apart from that, they love stories and poems and they would write their chronicles in this way. All the Northern Valers would tell the heroic stories of the bravest warriors to their children during the long and harsh winters.

There are three classes in a typical Northern Valers' tribe: the leader, the warriors and ordinary civilians. Of course, only the leader and warriors are entitled to make decisions that will affect the whole tribe. When there is a huge event in a tribe, the leader will rally the members for discussion. In circumstances that the fate of the whole Northern Valers is concerned, the leader of the tribe will send invitations to all the other leaders and hold Grand Rally witnessed by the High Priest. Of course, the Grand Rally of the Northern Valers is always special because it's easy for them to quarrel with each other.

In the Ancient times, Northern Vale was the home to Iceland Golems. The Iceland Golems once created a splendid civilization in Northern Vale. However, through the passage of time, they gradually vanished, leaving behind historical relics with their bloodline down to the Northern Valers.

According to the legends of Northern Valers, their ancestor, the Iceland Golems followed the Lord of Light away from the Land of dawn and went to the remote strange dimension, where they built the giant Sacred Palace to accommodate those who died in the battlefield.

To the Northern Valers, dying on the battlefield is a unique honor. They believe the souls of the heroes died in the battlefield would be reunited in the Sacred Palace built by the ancestors, where they could feast and wine. They would make merry and laughter from day to night. Cowards would be sentenced to the Frozen Hell, where they would suffer from endless coldness and never-ending piercing wind along with poisonous rain.

Also, the Northern Valers worship all the warriors who died in the battlefield.

Among the Northern Valers, there is a unique group of people, who are called as Valkyries. They are led by the High Priest and inhabit the grand Martyr Hall. Only the bravest and the strongest female warriors of each tribe can be selected as Valkyries, and the best Valkyrie will be the High Priest.

According to Northern Valers' religion, the fate of all the Valkyries is to guide the souls who died on the battlefield to the Martyr Hall and help them to go to the Sacred Palace. As time goes by, the Valkyries have shoulders another important mission: protecting the peace in Northern Vale. Every time when someone is selected as a Valkyrie, it will be a huge honor for the Valkyrie's tribe and all the Northern Valers. However, becoming a Valkyrie means abandoning secular happiness as Valkyries cannot marry nor bear a baby - they need to devote their whole life to the Northern Valers.

Due to the geographical reasons, the crops are extremely in shortage. However, the jewels and beasts' fur of the Northern Vale is extremely famous in the Land of Dawn. And that's how the sea trade of the Northern Valers becomes prosperous. Therefore, many Northern Valers become either fishermen or pirates. Obviously these two occupations are totally different. Those who choose to become fishermen can only drive their rugged fishing boats, either with their families or with their partners, to catch fish. Then, they sell them to the businessmen. Every day, the fish they can catch are so few and they can barely depend on them for a livingly. On the contrary, the pirates are there to plunder ships passing by to get brilliant profits. Meanwhile, those pirates hold enough will try to catch those giant and strong sea beasts, which can be sold for numerous money.

The pirates are usually well-organized. They act together and can go very far away with their giant ships. Besides plundering business ships, they will hunt for giant sea beasts, because the profits bring exceed far more than plundering business ships. However, high profits always go alongside huge danger. Those beasts are not only huge in the figure but very cruel. They can do every kind of horrible things.

Compared with ordinary fishermen, the ships of those pirates are so much bigger. The ships are tall, wide and heavy. Even in the most thunderous ocean, they can sail steadily. Moreover, the pirates installed giant horns at the front of the ships and put numerous cannons at the side to attack other ships.

Besides ships, the pirates of Northern Vale have developed various delicate instruments to hunt sea monsters. To those pirates, experienced and hard-working sailer skillful in using harpoon and diving make the perfect candidate for captain.

The time-honored culture stimulates the development of Northern Valers, who make a living by the side of the sea. Under such circumstances, famous navigators come into existence this way. They sail fearlessly in the board ocean and search for the broader world unknown.

[[File:Northern Vale - Bears.jpg|thumb|350px|left|[[File:Hero881-icon.png|20xpx|link=Masha|Masha]] Masha sees one of the bears got wounded after the raid.]]

Wolves are the most dangerous predators in the Northern Vale. They invade in groups, leaving no trace behind. They show no mercy to whatever they are after, either their prey or enemies. They have already attacked human for multiple times.

Fighters on the Stormy Sea 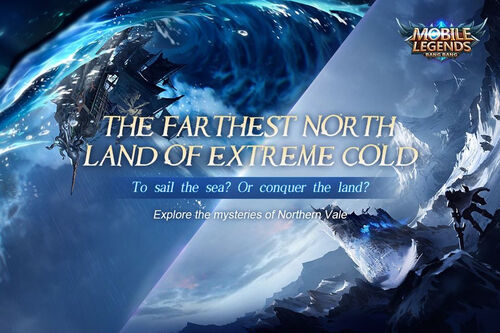 "War breaks out on the sea of Northern Vale again! On one side is the cruel and rapidly-rising pirate society of

Bane, and the other the fearless tribal warriors led by

Franco. But this time, the fragile balance between the two factions is broken by a mysterious figure with a powerful artifact." 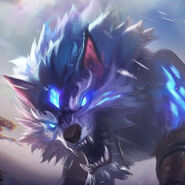