Mobile Legends: Bang Bang Wiki
Register
Don't have an account?
Sign In
Advertisement
in: Citations needed, Pages that use a deprecated format of the math tags, Heroes,
and 10 more

Valentina
Prophetess of the Night

Valentina, Prophetess of the Night is a hero in Mobile Legends: Bang Bang. 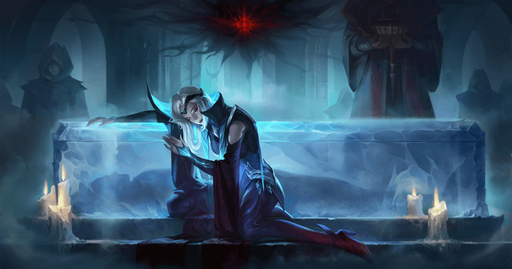 House Paxley ruled over the regions near the Lantis Mountains in the south of the Moniyan Empire. Generations of the house had guarded these areas for the Empire, defending against the invasion of the Abyss with magic and swords.

As the house patriarch's eldest daughter, Valentina had been given high hopes since she was born. She underwent rigorous training and grew up into a proud perfectionist, the heir most qualified to lead this noble house.

As she grew older, she went to the frontier and helped the house repel wave after wave of invading demons.

The news of victories in Lantis Mountains became the only thing that could put the civilians' minds at ease. As a result, House Paxley rose quickly among the nobles, while Valentina became the youngest and only female member of the house council.

In search of allies, Valentina went alone to Moonlit Forest despite the Empire's prolonged hostility toward the Elves. The Elf King, Estes, refused Valentina's request, saying the Elves had no interest in humans' warfare. An Elf hero named Irlan, however, was moved by Valentina's sincere words. Unlike Estes, he believed with the fall of the human empire, the demise of Moonlit Forest would also be imminent.

A few heated words were exchanged, after which Irlan followed Valentina out of Moonlit Forest with his friends.

Elves and humans had since fought alongside each other on the battlefields of the Lantis Mountains.

After the days and nights spent with Valentina, putting their lives at risk, Irlan realized that he'd fallen desperately in love with her. But Valentina was at a loss when Irlan revealed his feelings for her: she'd always been taught that a noble lady shouldn't indulge herself in ridiculous romance, and she should marry someone of equal status for the interest of the house. Nonetheless, Irlan's passionate courtship awakened the feelings buried deep in Valentina's heart. She felt the wonderful joy of being loved for the very first time.

Just when Valentina pretended to be untroubled but was actually unsure how to respond, Irlan seized the chance at the House Paxley election meeting and proposed that he was willing to fight under Valentina's command with the other Elves permanently, but on one condition: Valentina had to say yes to his marriage proposal.

Irlan's suggestion perfectly solved the problem that'd been troubling Valentina. Now she could follow her heart and accept his feelings for the interest of the house. And so[,] they shared holy vows under the bright moonlight, and Valentina became the head of their house as the house cheered with joy. But among the cheering crowd, her uncle remained silent—the position should be his according to the house rules.

With the assistance of the Elves, House Paxley gained power with each day, and Valentina was conferred the title of 'Duchess' by the Moniyan Empire. And she also relied on Irlan who showered her with love. Having grown used to coming face to face with death, Valentina finally tasted the sweetness of life.

But that was when a disaster suddenly struck: after biding their time and gathering strength, the Abyss once again attacked the fief of House Paxley with strong troops. Before the Emperor's reinforcements arrived, House Paxley was left to fend on their own.

Fully aware the house's force was no match for the Abyss army, Valentina decided to resort to the last expedient—to assemble all the house mages and cast the "Soul Casket", a forbidden spell that, once completed, could create a deadly zone and devour all the souls of the living within. Even the demons wouldn't be spared.

To cover the mages preparing the spell in the back, Valentina and Irlan led the bravest warriors to the forefront, meeting the Abyss army head-on.

The battle began, and thousands of demons swarmed toward the Elves and humans like ocean waves. But the alliance stood firm like the toughest of rocks, letting waves of the Abyss troops come smashing themselves into smithereens.

But these courageous soldiers still fell one after another. Seeing this, Valentina grew more anxious awaiting the signal for the completion of the magic spell. Their plan was to withdraw from the battlefield with all their troops as soon as the signal came, so that the magic zone covering the front line would destroy the demon army all at once.

However, Valentina suddenly noticed the symbol of Soul Casket appearing above the engaging armies, but the rear hadn't fired any withdrawal signal! Confused, she turned back only to find her own uncle and the mages sneering at her.

Knowing that she'd been shamelessly betrayed, Valentina shouted for everyone to retreat immediately. At the last moment before the casket fell, Irlan exerted his last strength to push Valentina out of the zone, before falling on the battlefield as he lost his soul.

The Lantis Battle was thus put to an end, and the invincible legend of Valentina continued. But only Valentina herself knew what price she'd paid for the victory…

The duchess executed all those that betrayed her and escorted her loved one's body back to Castle Aberleen.

She built a sacred hall in commemoration of Irlan and the other martyrs and had since dedicated her life to searching for a way to bring back Irlan's soul. In this process, Valentina grew more and more desperate and eventually turned to black magic and awakened a trace of consciousness of the Evil God of Trickery—Kalon.

Kalon told Valentina about the miraculous powers of the Heart of Anima—a broken piece from the Twilight Orb, and tricked her into signing a blood pact with him. According to the blood pact, Valentina would gain immortality and the power of shadow, but at the price that since then, all souls of House Paxley were to be tainted by Kalon. And when his power truly awoke, he would be revived through a Paxley descendant.

To prevent Kalon's return, Valentina left a prophecy informing her descendants that if the Cursed One ever appeared, they must get rid of the person at all costs.

Since then, Valentina had been hiding among the shadows, silently waiting for the appearance of the Heart of Anima, for the day her loved one's soul could be retrieved… 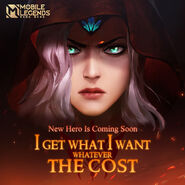 Valentina in a promotional image 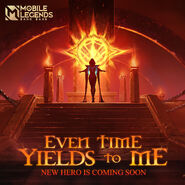 Valentina in a promotional image (2) 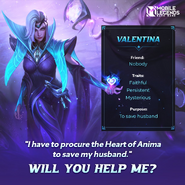