Just as the name of the mode suggests, this game mode will present the player with a 5 vs 5 matchup, similar to any other mode. However, you will not play along with real time players but instead, compete against computer-controlled opponents. An AI (artificial intelligence) team automatically driven by the computer will fight against you.

Usually, the VS A.I Mode is used as a training ground to play or try out a new heroes. Since the outcome of a match played in this game mode does not affect your game statistics and you can also earn battle points after the completeion of a VS A.I match. As always, players can invite up to 4 friends to practice together against the computer. 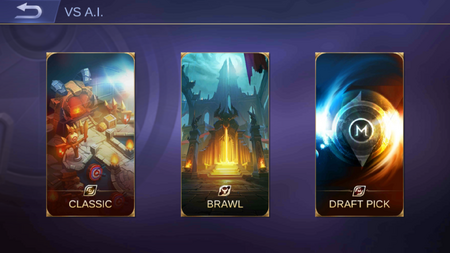 There are three game modes you can pick in this mode: Classic, Brawl and Draft pick. 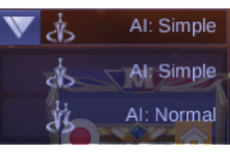 AI:Simple has very easy AI, good for practicing a hero you have just unlocked or are not yet familiar with.

AI:Normal has slightly more advanced AI opponents who can sometimes pose as a threat as they farm, lane, and carefully use skills. This difficulty is a bit more challenging than AI: Simple, and a much better option to practice a hero in an almost-real fight.

AI:Hard has moderately advanced AI opponents who know when to use their battle spells, properly time their skills to kill their opponent. They also attack turrets correctly unike in normal and simple where they die voluntarily. Although the AI still needs improvement in escaping and making their enemy heroes miss their skills.