She was born into Tang Household in the land of Ba and Shu in the south of Cadia Riverlands. The Tang household had studied hidden weapons for generations, and Tang Wanwan's father taught her the way of these hidden weapons. After a successful cultivation, Tang Wanwan bid farewell to her father and set off on her travels.

Brought up in the Bashu Region, Wanwan, born in a prestigious family well known for crafting hidden weapons and mechanical weapons, is an expert at those stuff. Extremely agile when she moves, she is an important member of the Oriental Fighters.[1]

In the south of the Cadia Riverlands lies a picturesque land where the civilization of Ba and Shu lived. "The Land of Abundance" was what the natives called this place. Tangmen, a faction that was known for their hidden weapons and skilled craft, originated from this land. However, Tangmen's new leader found out that many people often used Tangmen's crafts and hidden weapons to do evil, which was running against his will. Because of that, he decided to disband his faction and exiled himself to the forest, in a place of solitude with his daughter.

Since birth, Wanwan lived together with her father. The forest was her home and she spent a lot of time hunting and training there. On her fifth birthday, her father gave her a set of needles as a birthday gift that was made from a particular silver found at the bottom of the sea. That day, he also revealed the history of the Tangmen to her. This set of needles was a valuable and secret weapon created by Tangmen, which consisted of a total of 81 needles. Tangmen's skilled craft forged the needles into a lethal weapon, killing anyone who dared to challenge its power. Wanwan's father told her to use the weapon only if she was in danger. That's the first lesson her father taught her. One day, Wanwan and her father found Black Dragon at the bottom of a cliff. It is the first time that Wanwan saw a person who was injured so badly, and she couldn't bear to leave him alone. With the help of her father, she carried the Black Dragon to their home and took care of him. The Black Dragon was moved by this kind-hearted girl and opened his mind to her. He spent many hours with the young girl, telling her his story, his dream, and his ambition, teaching her how to become more powerful. However, the Black Dragon left Wanwan a few months later without leaving any word, which made Wanwan sad for a long time.

Ten years later, Wanwan grew up. Her skills with the darts became more pronounced, being able to split a drop of dew a hundred steps away into 2 with just a single dart. Her father told her not to show her formidable skills to others and to keep away from trouble. But Wanwan was too curious, and she wanted to travel the world. On the day Wanwan started her journey, her father gave her the most precious craft of Tangmen - the Crossbow of Tang, which could launch a rain of arrows to attack the enemy, and its power could scale along with the power of the handler. 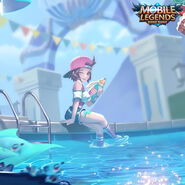 In Angela's skin splash art, "Summer Vibes," Wanwan can be found with her skin, Teen Pop.