He is the first hero be introduced as a member of Forsaken Light.

Summons domain and transforms into Lieh

Animals, children, being trusted by others

Among the emerald mountains that stretched hundreds of miles near Dragon Altar lay Floral Falls, a serene valley where peach trees grew in every corner and petals fell gracefully like snowflakes whenever a breeze blew past. People who lived there practiced the ancient oriental martial arts and were called martial artists by others in Cadia Riverlands.

In an early morning seventeen years ago, a baby boy drifted in a basket down the river to Floral Falls and was found and adopted by a local. He was named Yin after the earthly branch for the Year of the Tiger—the year he was found.

Ten years quickly passed by, and Yin grew up into a young boy training in martial arts. He seemed scrawny but had unexpectedly powerful strength, and the elder martial artists in the valley thought of him as a martial arts genius gifted to them by the heavens.

Fate was fair, however. Yin possessed incredible physical talent, but had a critical flaw—he couldn't comprehend the intent to kill as he was too good-natured. For the innocent boy, every fight was only a spar between friends. On the peaceful lands of Floral Falls, he had no way to know what it meant to fight to the death, and so his martial arts skills never reached the standard for actual combat, which prevented him from becoming a real martial artist.

One day, Yin went out to find a new place to try to comprehend the intent to kill, but accidentally lost his way on the meandering paths of the mountains.

Yin was trapped and mumbling complaints when a little girl's voice came from above, "Eh? I thought it was my dinner… Turns out it's you idiot in trouble!"

Yin looked up to see a pretty young girl standing beside him, raising her hand and freeing him from the trap in the blink of an eye. After he was out of the trap, he looked at the broken noose and said apologetically, "Does it mean your dinner's gone? Here, you can have this—" Then he handed over the flatbread he brought with him, when his stomach started rumbling in the worst time.

The two kids burst into laughter together and became friends at that exact moment. Wanwan liked to pull pranks on Yin as he was quite gullible and often joked about how he fell into her trap that day and then called him an idiot. 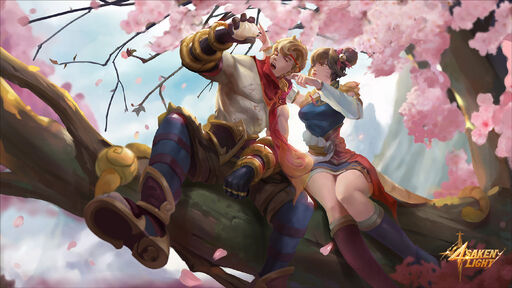 That was how Yin and Wanwan first met. From then on, they would often hang out with each other and play games in the mountains.

Years quietly passed by as they laughed and played, until one day Wanwan suddenly left for months.

One day, the gloomy rain clouds above Floral Falls stretched all the way to the horizon, and the thin drizzle seemed as if it would never stop. Yin gazed into the distance by the mouth of the valley, before starting his training somewhere quiet.

Meanwhile, an evil entity shrouded in ominous, dark clouds descended upon the valley, and after a quick browse around, the entity chose Yin. 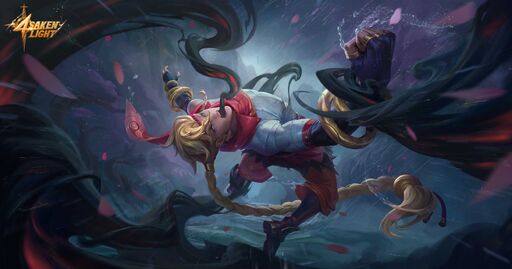 Yin was sitting in meditation when a sudden aggressive force rushed into his body! He felt something encroaching on his mind, his body in great pain as if it was being torn apart. "There's no point in fighting. You will become my new body!" The entity declared his victory to Yin in a ruthless tone. In bewilderment, Yin acted on instinct and fought over control of his mind and body with his inner strength.

It was then when Yu Zhong hastened there.

Before Yin could utter a word, Yu Zhong lunged at him with a strong intent to kill. A fierce battle broke out! Yin was forced to fight Yu Zhong who wanted him dead, and it was a battle of life and death that he'd never experienced before—there was no stop before it went too far, and every move Yu Zhong made aimed to take his life. Yin managed to dodge the critical attacks, but his limbs were already covered in blood.

After the initial confusion and terror, an emotion that Yin had never felt before began growing in his mind, burning like flames. Why is he attacking me? Why does he want me dead? Yin rushed toward Yu Zhong as fast as lightning, his one kick forcing the demigod to move a few steps back. Yu Zhong stared at the young boy in front of him in surprise, amazed at the boy's incredible physical strength.

Flames of rage burnt in Yin's eyes. He'd finally comprehended the intent to kill—I didn't know you; I didn't do anything; I just managed to fend off the unknown entity's attack; the person I was waiting for is DEFINITELY NOT YOU! The thunderous roar Yin let out sent peach blossoms flying in all directions. He threw quick, powerful punches at Yu Zhong in a frenzy of rage. Yu Zhong exposed his weakness while struggling to defend himself, and was hit in the stomach by Yin's heavy punch and knocked all the way into the river.

Breathless, Yin stared at the ripples on the water surface and thought to himself, "Did I win?"

All of a sudden, a giant spout of water ejected from the river, and from the waves rushed out a ferocious black dragon!

Yu Zhong, now as Black Dragon, growled and charged at Yin in full force. Yin knew that as a mortal human, he was no match for the Black Dragon, but he refused to flee. Instead, he shouted and raised his fists, ready to face Yu Zhong head-on—I'll kill you even at the cost of my life!

The deafening sound emitted by their clash shook the ground, while their movements stirred up the air around them, causing the flower petals to fall like raindrops.

Yin looked in surprise at his own hands blocking the dragon claws as they became strangely powerful, when the aggressive voice sounded in his head once again, "You've got guts, kid. I'll help you!"

In the blink of an eye, Yin transformed into Lieh and used a special skill that he'd never seen before to drag the Black Dragon into another dimension, before launching frenzied attacks at him.

The life-and-death battle continued on, while Yin's consciousness began to fade. He was about to completely lose himself…

"Idiot!" A sudden shout awakened Yin like lightning breaking through darkness—It was Wanwan!

Yin fought with every fiber of his being and finally regained control of his body. He panted heavily as if he'd just come back from death, and saw that it really was Wanwan who was standing beside him!

Turned out Wanwan had tracked Yu Zhong all the way here to ask for an explanation from him!

Wanwan raised her family heirloom, Crossbow of Tang, at Yu Zhong and asked him with quivering words and tears in her eyes. She wanted to know why Yu Zhong had lied to her, why he was hurting her friend, and why he'd betrayed her years of trust and friendship.

Seeing Wanwan in rage, Yu Zhong returned to his human form before heaving a sigh and revealing the truth: Evil God Lieh had been wreaking havoc in Cadia Riverlands since ancient times. It was him who'd possessed the greatest fighter of the lands—Black Dragon and evoked the falling out between him and the Great Dragon, leading to an internal dispute that had almost wiped the lands off the map. Yu Zhong used Wanwan to get the Black Dragon's power so that Cadia Riverlands could move in the direction he wished, and before that he must destroy Lieh and prevent any future trouble! Chased by Yu Zhong, Lieh had possessed numerous strong warriors along the way but had only suffered defeat after defeat. He'd lost most of his power when he came to Floral Falls and sneaked into Yin's body.

Yu Zhong looked at Wanwan and Yin and said in a calm voice, "He's been possessed by Lieh and will get people here killed sooner or later!"

And with that, Yu Zhong left. Wanwan lowered her arms as if she'd lost all strength, her crossbow dropping to the ground with a thud.

It was then when Yin finally understood what horrifying power was within him now. The youngster looked at Wanwan in front of him with a woeful smile and then cast his gaze upon the emerald mountains that raised him. It took all his strength to keep the Evil God at bay made up his mind.

On the same night, Yin left his house with only a rucksack on his back.

As he gently closed the door and turned around, rows of sigils emerged on the bandage around his chest, while a disembodied voice wafted into his ears, "This Black Dragon charm can help you make it to Moniyan. You'll find info on the Evil God there…" 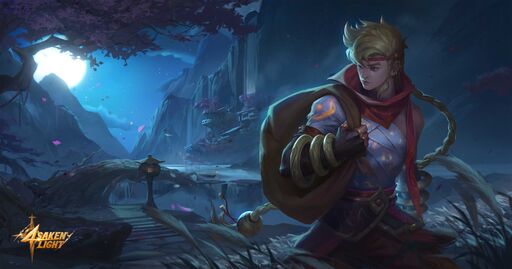 With a final glance at the place where he'd lived for seventeen years, Yin said into the air, "I cannot protect you now, but I promise I'll be back once this is all over."

As so, the youngster left Floral Falls alone in seeking a way to rid himself of the Evil God…

The Host: In Hopes of Light

Main article: The Host: In Hopes of Light