Zhask
The King of Swarms

Zhask, the King of Swarms is a hero in Mobile Legends: Bang Bang.

Zhask expanded his swarm as he pleased in the universe, disrupting its balance in the process. Yve pursued him, but Zhask was able to escape every time. When he shuffled to the Land of Dawn and attempted to destroy it, he was hit hard by the resistance of

Aurora and Tobias, so he hibernated in Kastiya to recuperate. But at this time, Yve also arrived, so a dual was imminent.

In the vast universe, there are countless unknown planets and mysterious regions.

Some planets have been annihilated and forgotten, but some endure – like the planet of Kastiya.

Many great civilizations were built over a long history of discovery and enlightenment. This was however, not the case for the Kastiyans – whose bloody history was etched in struggles and brutality. For countless eons, the Swarm of Kastiya plundered and devoured to maintain the prosperity of their own race. The vicious nature of the Swarm made them keen on endless encroachment and reproduction.

As the king of Kastiya, Zhask knew exactly what he and his race needed. The terrifying Swarm was able to follow Zhask's lead, appearing anywhere in the universe, and then devouring all in its path. The scourge of the Swarm was more prolific than any other race. No planet in known history has ever been completely safe from the Swarm – and the most terrifying thing was that the Swarm could never be completely wiped out.

Of course, the Swarm of Kastiya also had their arch-enemy – Mithlora.

Mithlora was a mysterious region among the stars. The race living there was few in number, but naturally powerful. As one of the most advanced hunters in the universe imbued with tremendous power, Mithlora was burdened with the purpose to maintain the balance of the universe. Therefore, the ever-present Swarm had the ever-watchful Mithlora to deal with.

A veteran hunter from Mithlora had once destroyed Zhask's home Kastiya, but the Swarm could not be completely wiped out. In fact, the destruction of their hometown sparked a raging crusade to expand wildly and ravage other planets. Led by King Zhask, they took absolute pleasure in plundering and replicating their own species. In the midst of their savagery, Mithlora had dispatched a formidable new hunter – Yve.

Zhask was not afraid of this new threat. On the contrary, he enjoyed the thrill of the chase. Even though Kastiya had already been reduced to dust, Zhask and his Swarm believed that any area in the starry sky may become the the new Kastiya II – so long as they never stop breeding.

With great strength and cunning, Zhask caused Yve’s efforts to hunt down the scourge to fail countless times. Because of the Swarm’s potency to reproduce, the planets that had been invaded had almost no power to fight back. The creatures on those planets were quickly rendered extinct from Zhask's desolation.

Although those from Mithlora never needed help from others, the weakness of those planets isolated Yve to a certain extent. Zhask was always 2 steps ahead of his Mithloran pursuer.

Yve would always find herself a completely plundered and ruined planet with Zhask already absconded towards his next foray into the known universe.

Zhask was immersed in the pleasure of plundering. He enjoyed the thrill of the hunt and the endless slaughter. Even with the best of Yve’s attempt to stop him, Zhask would always manage to escape under the cover of his swarm.

The scars on his body did not deter Zhask from his plundering journey. Without pause, Zhask once again passed through the spacetime continuum and came to a new area.

This time, he came to the Land of Dawn.

The arrival of Zhask and the Swarm brought serious disaster to The Northern Vale in the Land of Dawn. Numerous villages and tribes were destroyed by the Swarm and the people were displaced. But in a place where heroes gathered, and unlike his previous encounters, Zhask found unprecedented resistance in the Land of Dawn.

The young knight Tobias led his knights to fight Zhask and sacrificed his life for his land. It was in this battle that Tobias’ lover Aurora, dealt Zhask a devastating blow.

This was the first time that Zhask had been badly hurt by anyone other than Yve. Injured, he could not escape from the Land of Dawn through the Chrono Rift, so he could only find a piece of land on this continent as a temporary stronghold to give him and his Swarm some respite. He never imagined that these seemingly fragile creatures would be so powerful.

Zhask went to ground, waiting for the right opportunity. But the situation was a bit tricky: Aurora, who in order to avenge her lover, guarded the Frozen Ocean and never left sight. Meanwhile, the unusual yet familiar time and space fluctuations in the universe only meant to Zhask of Yve’s imminent arrival. A battle of astronomic proportions was soon to happen in the Land of Dawn that could decide the fates of countless many in the universe…

The King of Swarms 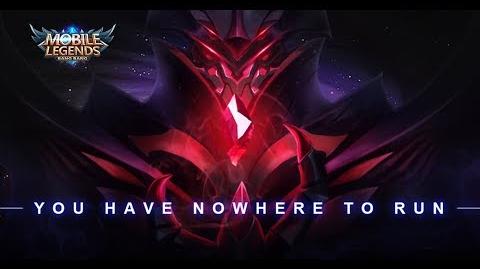 Mobile Legends Bang Bang! You have Nowhere to Run!